The following is syndicated with permission from Forgotten NY.

At the southern tip of Soundview Avenue in the Bronx is the newest NYCFerry dock, providing a one-seat ride from this corner of the borough to Wall Street. I haven’t been to Soundview since high school, when my classmate Karen hosted friends at her home and there was Dominican music in the background. Soundview Avenue is the odd one here, cutting through the street grid on its two-mile route.

Having previously chronicled other prominent points of land in the city, I followed Soundview Avenue to its tip. Along the way, the triangular intersections are designated as Greenstreets parks, with more than a dozen on the route. At the end is Clason Point, historically pronounced as Clawson.

The most notable of these triangular parklets is Woodrow Wilson Triangle, bound by Underhill, Patterson, and Soundview Avenues. Its World War One monument was dedicated in 1928 on the decade anniversary since the end of the war.

On the plaque are quotations from Presidents Abraham Lincoln and Wilson. An odd pair as Lincoln emancipated the slaves while Wilson was a staunch segregationist. 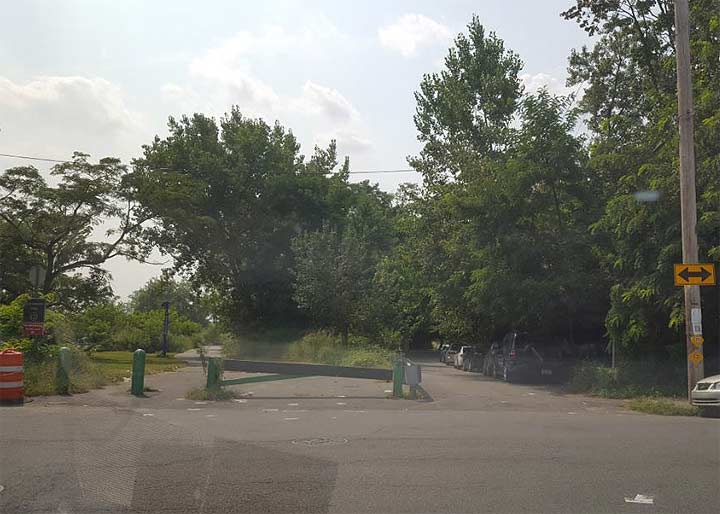 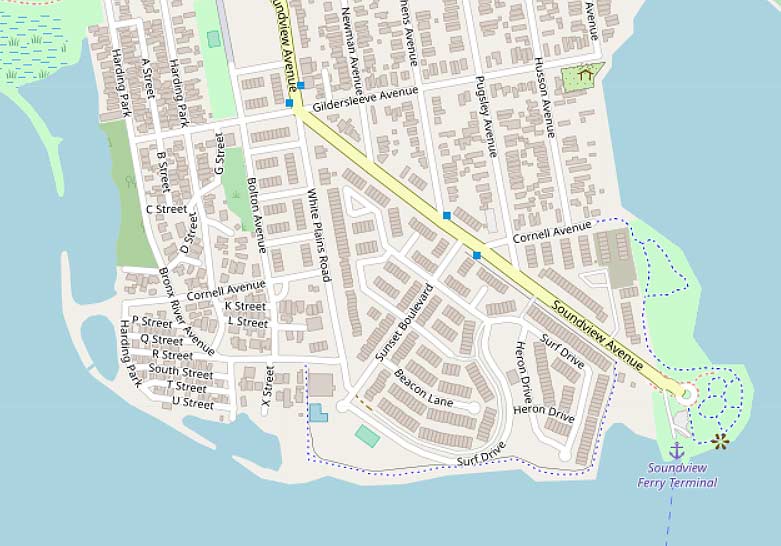 Your old Hagstrom map won’t help you here as many of the streets on the grid were never completed, end midblock, and others appear partially completed. Turning right from Soundview Avenue, one enters Harding Park, a cluster of bungalows built organically in the 1920s by Thomas Higgs and named after then-President Warren G. Harding.

City planner Robert Moses attempted to condemn this community in the name of slum clearance but the residents won and in 1982 the Harding Park Homeowners Association succeeded in gaining title to their homes and land. Kevin Walsh was here in 2006, telling the story of Harding Park in detail. 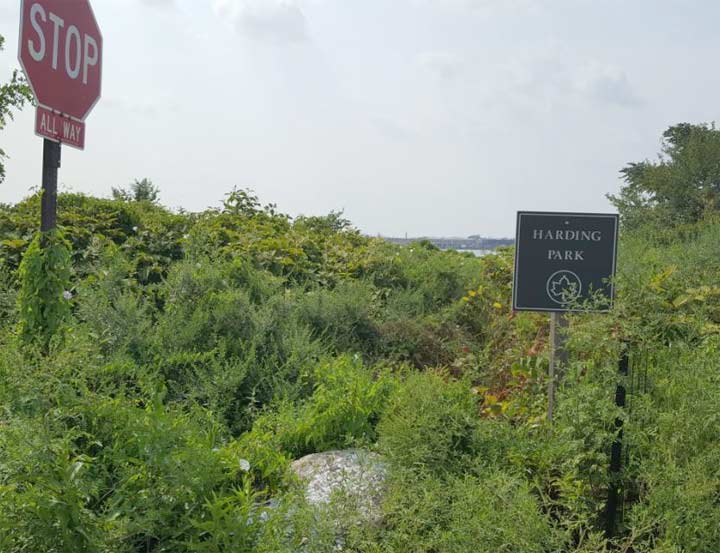 Undeveloped waterfront parcels were acquired by the city for parkland but kept in a natural state. Dead-end streets disappear into the tangle of vegetation at Harding Park. 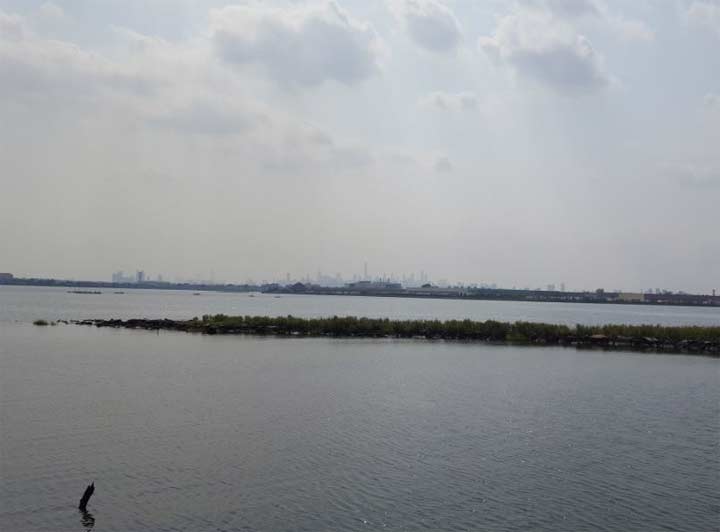 Beyond the bushes there is a lagoon in Harding Park separated from the East River by a rocky breakwater. This is where the Bronx River widens into the East River. In the background are the Hunts Point Marketand the skyline of Manhattan. 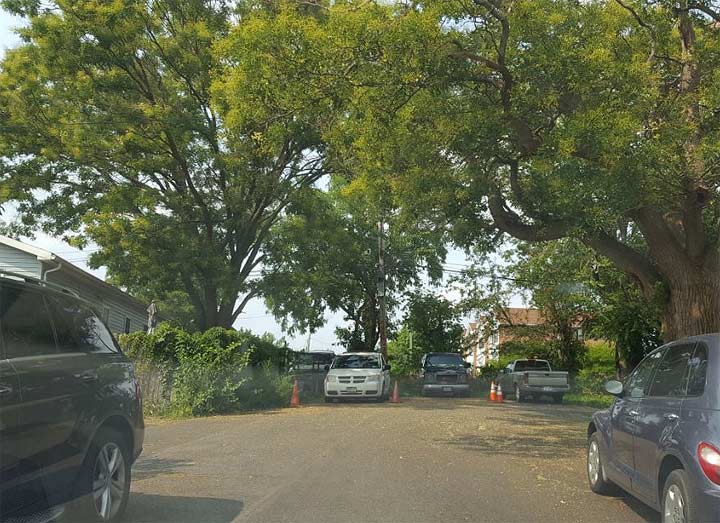 As mentioned, Harding Park developed organically without regard to the borough-wide street grid. Some streets here are interrupted midblock by properties, and others do not appear on any official maps. 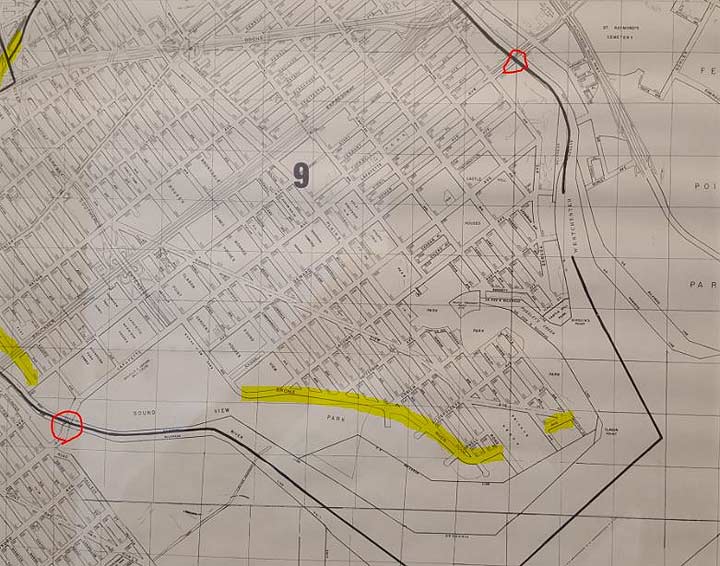 One of the great unfinished waterfront roads here is Bronx River Road, which was intended to run continuously from East Tremont Avenue along the east bank of Bronx River down to the tip of Clason Point. Today it runs in five segments that are kept separate by Soundview Park, Harding Park properties, and the Shorehaven development.

Speaking of unfinished plans, further inland at Story Avenue, the Bronx River Parkway abruptly ends. Usually when a highway ends, it does so by merging into another highway. Destination signs along the southbound parkway show Soundview Park as its terminus.

A 1960s hand-drawn Hagstrom map shows the parkway continuing into the park with an interchange at Randall Avenue, Lafayette Avenue crossing the Bronx River, and Bronx River Avenue curving along the shoreline. Hagstrom often tried to keep their maps up to date by depicting planned highways and paper streets as reality, because in most cases when Robert Moses proposed something, it became reality.

On the other hand, the massive superblock interrupting White Plains Road at the time was the wetland source of Pugsley’s Creek. Most of it would end up developed.

Another unusual map of what Clason Point could have been is the 1941 Barkan Street Directory map that shows the grid in its entirety mashed with the natural courses of Bronx River, Pugsley’s Creek and Westchester Creek. A trolley line runs down Soundview Avenue, but Bronx River Parkway has not yet been extended to this corner of the Bronx. The section between Pelham Parkway and Soundview opened in 1951.

I would like to see every major street have a monument and plaza at its terminus, but the southern tip of White Plains Road is marked by a fence that keeps it a few yards short of the East River. This road runs north for 7.2 miles to the city line at Wakefield. It continues north under other names. Its namesake city is 10 miles north of the city line.

Returning to Soundview Avenue, there is a gated community with its own set of nautical theme streets: Admiral Court, Beacon Lane, Surf Drive, etc. This is the 57-acre Shorehaven community, set apart from the rest of southern Bronx by its wall and security guards.

Between 1949 and 1986, this property was the Shore Haven Beach Club, a member-only resort for working-class Bronxites.

In 1949, Mal Deitch and Joseph Goodstein transformed the defunct Clason Point Bathing and Amusement Park, into a private resort with a swimming pool, cabanas, playground, and a stage. Most of its clientele were working class and middle class Jews who resided in surrounding neighborhoods.

Like a Catskills resort or a Miami Beach hotel, Shore Haven had a unique cultural feel of secular Jewish life that included stand-up comedians, singers, mah-jongg, and cocktails. By the 1980s the Bronx was more Hispanic than Jewish, and new residents did not join the club in large enough numbers.

As an amusement park, Clason Point was linked to the city by a ferry, competing for patrons with the North Beach Amusement Park across the East River, and Starlight Park on the Bronx River.

The park has a tragic history with 6 deaths and 22 injured on June 11, 1922, when a storm blew down an operating ferris wheel. The amusement park closed in 1935.

The 1927 G. W. Bromley map of Clason Point shows the bungalow colony, amusement park, and the tip labeled as “Public Place.” It was a crowded district in contrast to today’s gated community.

Between 1906 and 1939, a ferry operated between Clason Point and College Point. The completion of the nearby Whitestone Bridge put the ferry out of business.

On the above 1940 photo from the Municipal Archives, the ferry gantries stood unused in place for a few more years. Following the demise of the ferry, the tip of Clason Point reverted to parkland and was given its present landscape in the early 1990s.

This includes a scenic traffic circle as a terminus for Soundview Avenue with vistas of the East River and Whitestone Bridge.

Across the East River you can explore the northern shoreline of Queens and see the palatial homes of Malba.

Here you can also take the NYCFerry at the cost of a subway ride down to the Upper East Side, 34thStreet, and Wall Street. At some point, we should do a Forgotten-NY cheapskate’s cruise aboard this ferry. We’ve haven’t yet had a floating ForgottenTour. My previous examples of exploring tips of land in the city include Throg(g)’s Neck, Breezy Point, and Kingsborough Community College.

Sergey Kadinsky is the author of Hidden Waters of New York City: A History and Guide to 101 Forgotten Lakes, Ponds, Creeks, and Streams in the Five Boroughs (2016, Countryman Press) and the webmaster of Hidden Waters Blog.

Check out the ForgottenBook, take a look at the gift shop, and as always, “comment…as you see fit.”

Another Ferry Stop is Coming to The Bronx This Year