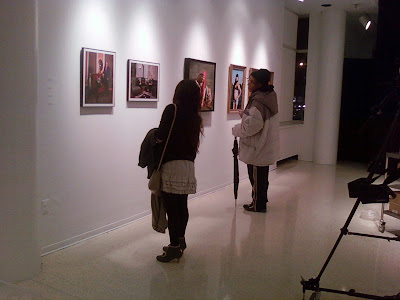 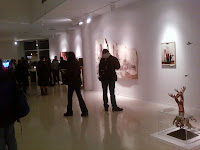 Last night at Hostos Community College, the Longwood Arts Gallery was abuzz with activity for the launch of a new exhibit, ANTHEM: an all-american dystopia.  The exhibit is a 20th anniversary celebration of the Bronx Council on the Arts’ BRIO (Bronx Recognizes Its Own) award and according to the Longwood Arts Project, this exhibit, “explores an America within the crux of reforming a national identity; family, health, politics, urban crisis and decay, environmental issues, consumerism and globalization.”  The exhibition is curated by Melissa A. Calderón, a local Bronx Latina artist who received her BA in Art History from CUNY Lehman College and works in various forms of media such as sculpture, installations and photography. 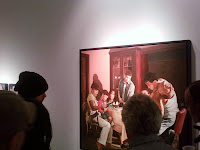 Every artists in this program are BRIO award winners from 2008 or 2009 and all have created works that are multidimensional in their scope of message and what you see may not necessarily be what it means.  The show is broad in its scope and definitely worth a trip to the Longwood Art Gallery @ Hostos Community College whether you are from the Bronx or not so take the 2,4 or 5 express train to 149th/Grand Concourse and check out just a small sample of what The Bronx has to offer. 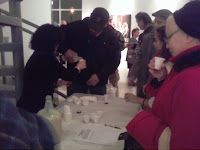 Also of notable importance, last night during the opening of the exhibit right in the gallery space was also host to The International Coquito Federation – Coquito Masters Qualifier Series for 2009.  For those of you who do not know what coquito is, it is Puerto Rico’s answer to Christmas Eggnog made of rum, coconut cream, cinnamon to name just a few of its ingredients.  The ICF is the project of Debbie Quiñones who says its mission is to promote coquito around the world as a gourmet drink as well as cultural awareness.  Oh and did I mention that Coqui Mexicano‘s entry now qualifies for the great coquito showdown on December 19th at El Museo del Barrio?  Yes…You heard it here!  If their coquito is good enough to qualify for such a prestigious event, can you imagine what their food is like?


So here’s a big Melrose THANK YOU to Longwood Gallery, Bronx Council on the Arts, all participating artists and supporters for bringing the arts to the Bronx and in particularly to the South Bronx and Melrose.
Also would like to give out or first big WEPA! to Coqui Mexicano for qualifying to compete at the big coquito showdown on December 19th at El Museo del Barrio…Coquito Mexicano truly are what comunidad (community) is all about! (Wepa is a Puerto Rican exclamation of joy and happiness, similar to the Greek OPA!) 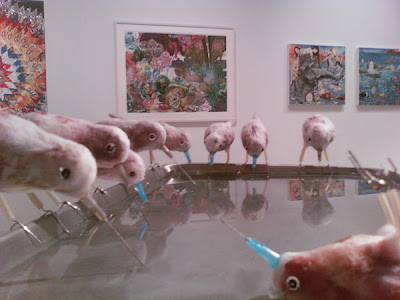 Birds with syringes for beaks 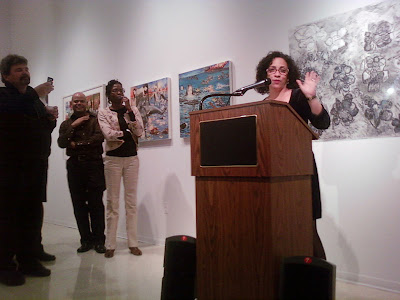 Debbie Quiñones, President of the International Coquito Federation explains the federation’s mission to the gallery attendees. 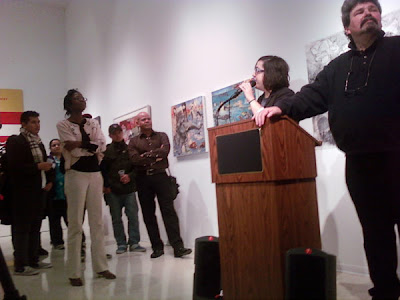 Melissa A. Calderón addressing the crowd. 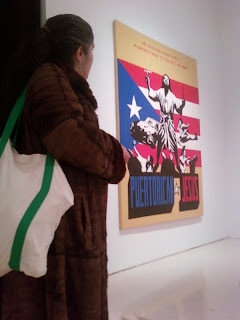 The Coqui half of Coqui Mexicano takes in one of the exhibits which caught her eye.
Facebook Comments
Previous Article

World AIDS Day, The South Bronx and Latino Sons of the Red Ribbon