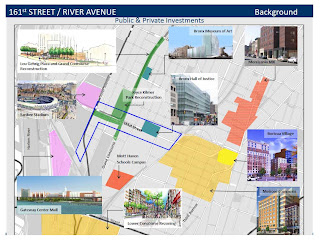 Melrose and Concourse Village will benefit tremendously from the newly adopted rezoning of East 161st street from Park Avenue , the eastern most part of the new zoning area, across to the west towards River Avenue right at the new Yankee Stadium. The new zone then proceeds south along River Avenue to East 153rd Street right where the new Metro North station opened earlier this year as well as the Gateway Mall which also opened earlier this year. (click on any image to expand the view of that image)

What exactly does this mean for us in Melrose as well as our neighbors in Concourse Village? Simply put with a minimal rezoning of just a few lots in what is the most important corridor of The Bronx, we are set to gain more office buildings as well as more residential units in an area that is still growing considering there is a recession and decline in real estate projects in general.
For those of you who do not know, East 161st Street is the heart of The Bronx as it is the main thoroughfare in Civic Center. Within 3 blocks you have The Bronx Borough Hall, Yankee Stadium, what will be the Heritage Park once the old Yankee stadium is demolished, the old Criminal Courthouse, the new Bronx Hall of Justice, Concourse Plaza Mall which currently houses the office building where the offices of the Borough President are located. On the western end of that corridor you have the 4, B and D trains at River Avenue/E 161st Street and the easternmost end of the new zoning area you have the Melrose Metro North station at 162nd Street and Park Avenue.
The new zone is divided into 3 nodes each with specific goals and are as follows:
Once developers take advantage of the new zone and the City of New York does its part now that it has approved the zoning, the 161st Street Corridor will be a beautiful street linking the Transit Node where the 4, B and D trains are located, Bronx Borough Hall, Yankee Stadium, Civic Center with the new Boricua Village and its vertical 14 story campus for 2,000 students, 4 residential apartments of low to mixed incomes and middle incomes (approximately 700 apartments in total) and Courtlandt Corners currently under construction which an additional 323 units.
This is truly an exciting time to be living in Melrose. A big Melrose THANK YOU to the City Council and Department of City Planning for approving the new zoning on September 30, 2009! Thanks for your continued support in rezoning a once neglected and abandoned area!
Diagrams compliments of New York City Department of City Planning.
Facebook Comments
Previous Article